My First Visit to a Village in the Amazon

We Are the Amazon

My first visit to a village in the Amazon

I had been living in the jungle city of Iquitos for a few days and a fellow worker of the cruise company where I worked named Wilson asked me if I wanted to accompany him to visit a relative in his town. It was early, and I wasn’t busy with any important work. I had just arrived in the jungle and what mattered most to me was learning and trying to adapt to my new home as soon as possible. What better way to do it than to go to a town in the area and meet the locals.

I got on his bike and went to one of the small “ports” of the city. There were innumerable motorized boats and no sign that could indicate where they were going. It was clear that the only way to know where they were going was to ask the person in charge of the boat but that also became a challenge since the crowd of people moving from one place to another was a challenge. Fortunately as I was going with my friend it was easy and  we quickly embarked. 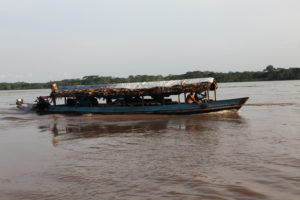 Boat motorized by the Amazon River

After approximately two hours sailing through the Amazon River and entering one of its thousands of tributaries, we reached the town. From the boat I could observe how the inhabitants were by the river doing their domestic tasks and some fishermen in full butchering. 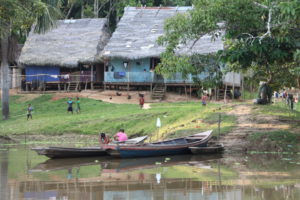 Arrival to the town 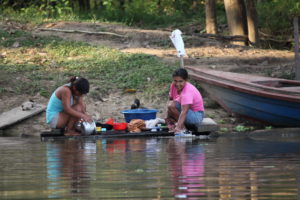 From what I could see it was a small town (no more than 100 inhabitants). All the houses were made of wood and they were very similar. The inhabitants looked at me with astonishment, they put their heads out the windows and the younger ones looked at each other and laughed when they looked at me. It was clear that they were not very used to visits from outsiders. In that same moment it was the attraction of the inhabitants of the town. It was impossible for me to go unnoticed. I saluted politely and could not help but laugh, their smiles were contagious.

I went with Wilson to his family’s house. They kindly invited me in and offered me a passion fruit juice. The house consisted of a large room (the equivalent of our living room or dining room) where there was also a small rudimentary kitchen. Subsequently there were two small rooms. The Amazonian houses are characterized by their spaciousness and lightness. After all, in the jungle it is hot all year round and it makes no sense to make living quarters with wide walls. I could see immediately that it was a fisherman’s family since it was surrounded by nets and fishing tools.

After a while and after greeting the whole family Wilson told me the following. “Come with me, Luis, I’ll take you to a place you’re going to like.” Without knowing where we were going, I continued to observe the houses whose inhabitants did not stop going out to look at me. I saw some signs in a language that I did not know, and they were everywhere. Wilson explained to me that it was Kukama-Kukamiria, an Amazonian language but unfortunately it was almost no longer spoken. 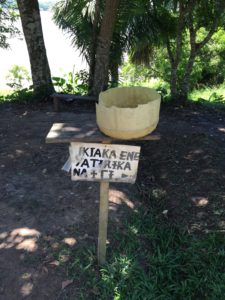 The Kukama Kukamiria is a language in disuse and belongs to the Tupi-Guarani linguistic family. According to experts, the Kukama-Kukamiria people initiated a series of migrations from the central Amazon in Brazil and arrived in what is now Peru two or three hundred years before the arrival of the Spaniards. During the 1990s, the Peruvian government implemented policies so that the country’s indigenous languages ​​would not disappear, trying to inculcate their use.

My entrance to the school was stellar since, being such a small town, not to say village, my presence had already spread the word. Several children were waiting for me at the door. I felt guilty for interrupting the class, but the teacher seemed to love it and took the opportunity to start a conversation with her. I loved exchanging some words with the children at the school and also seeing that they were in Kukama-Kukamiria class. 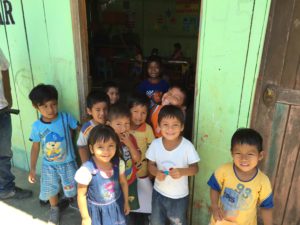 Children at the school door 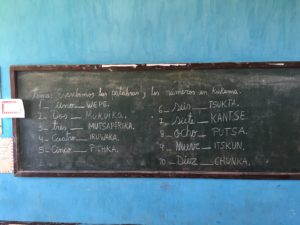 Slate in Spanish and Kukama-Kukamiria

Before returning we took advantage to eat something given that our trip back was long. I went to the fishermen of the village and they showed me the catch of the day. They showed me a very curious fish called colloquially carachama. Its appearance was a bit dark, almost dark black and very similar to those of the dinosaur era. 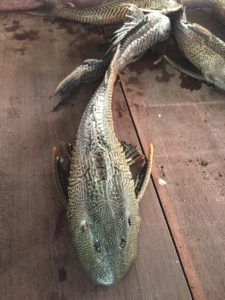 The carachama fish (pseudorinelepis genibarbis) which means “without ribs” due to the absence of ribs after the sixth central vertebra is characterized by its appearance. It has thick scales that look like a medieval armor, black eyes, sunken and its head is small and triangular. It has an extraordinary nutritional value (high concentration of phosphorus) and is very much consumed in the Amazon. The best known dish is the carachama chilcano, which is a soup based on such fish. As we had little time we ate it on the grill. Once we finished we had to leave before nightfall because sailing in a small boat is counterproductive at night. 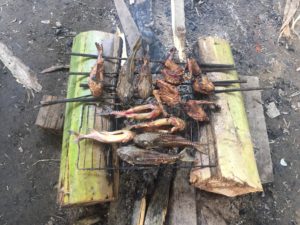 My new home: The Amazon

My first experience in an Amazonian town was amazing and being so close to the locals It seemed extraordinary. What struck me most was his sympathy, humility and kindness. I felt immediately welcomed. From that moment I knew that the Amazon and its inhabitants were going to be part of my essence because I perceived their enthusiasm for life and their generosity as before I had never felt it. It was clear that the Amazon was going to be my home for the next few years. 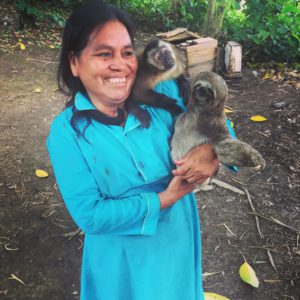 The Mysterious Boiling River of the Amazon

In Search of the Amazon Cataract

Next
This website uses cookies to improve your experience. We'll assume you're ok with this, but you can opt-out if you wish. More Accept